Hi! I’m Justin. You may know me for writing on my own gaming blog Ninja Game Den, or my personal blog Ninja Lounge House. Or if you’re from Blue Screen of Awesome, you might know me as that guest writer that wrote the Indie Wonderland piece about Rogue Legacy, as well as half of the Tower Wars piece. Anyway, I like writing, and I like games. Coincidentally, I like writing about games! Jarenth does too, but his writing style differs a bit from mine. I guess you’ll see how as we go along.

My column here will henceforth be called Talk of the Ninja, and in it I’ll talk about games old and/or new, small and/or large, popular and/or obscure. I’ll mostly just be writing whatever I like to write about at the time. Hopefully that will translate to some sort of entertainment value for you.

Now, onto our feature presentation… 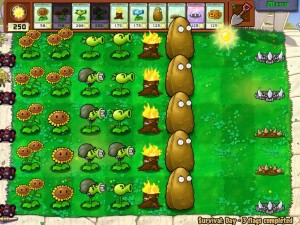 I’ve often regarded Plants vs. Zombies as the ultimate gateway-drug game, as well as a game that’s damn near perfect. Don’t get me wrong — I’m of the firm belief that no game is perfect, and that “perfection” is mostly just an unfeasible ideal. But Plants vs. Zombies does a fantastic job walking a tightrope between accessibility and depth, and manages to provide a challenge to core gamers without being unplayable to someone who’s never touched a game before. Yes, it’s a “tower defense” game, but it shook up the genre in a way I’d never seen before, and it’s still engaging to play to this day. 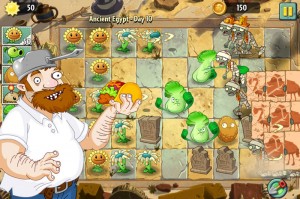 Please note: all the screenshots for Plants vs. Zombies 2 I’ve taken from EA’s website. This game is on smartphones only, and screenshotting on one of those is tricky.

Plants vs. Zombies 2: It’s About Time, released somewhat late last year, takes the gateway-drug concept further by providing itself free-to-play. The game was released on iOS before Android, so my mother was able to play it first. She made the mistake of reading user-submitted reviews before playing, and found most of them were extremely negative. Players claimed that the game was filled with aggressive microtransactions that forced you to shell out all your cash just to enjoy it. Once she actually downloaded the game and we got to play it, however, we found that the microtransactions are mostly non-obtrusive extras that you absolutely do not need.

Some people are apparently immediately cynical about free-to-play games, so I’m going to say this right away: Plants vs. Zombies 2 is entirely beatable, from start-to-finish along with all the optional levels, without spending a single penny. My mother and my girlfriend each finished the game using a budget of $0.00. I actually did buy one little upgrade, but not because I felt like I needed to — because I wanted to show support for a game I enjoyed.

This is not to say that the monetization is perfect, because it isn’t. The things you can buy are a few extra plants (almost all of which are plants from the first game that aren’t needed here), little bonuses like an extra seed slot, or coins. (I’ll get into the coins and the function they serve later.) Each piece costs $3-4, which is pretty steep for something that will probably rarely make a large difference. I would say a better avenue for microtransactions would be cosmetic alterations to the plants, but the strange thing is that the game already has those — you just unlock them by playing through the game and occasionally getting a random present from a periodical event called the Piñata Party. In other words, they chose cosmetic costumes to give in random drops, while the content that requires real money actually alters the gameplay.

But if you don’t like microtransactions, there’s a pretty easy way to get around Plants vs. Zombies 2’s price model — ignore the little button at the top right of the screen labeled ‘SHOP’. It’s as easy as that. The game is not balanced in favor of spending real money and roughly 99% of the new content is free. There used to be optional pathways on the world map that you could only unlock by either spending money or using very rarely found “keys,” thus forcing you to grind for long periods of time in order to avoid the microtransactions, but they released a big update awhile back that completely changed the world map and removed the keys altogether. Now you can just play from start to finish, just like its predecessor.

Now that I’m done addressing the elephant in the room, let’s talk about the actual game part of this game. 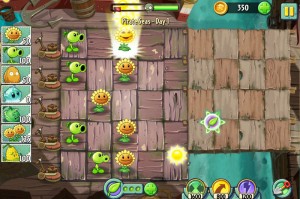 As I said before, I consider Plants vs. Zombies’s greatest strength to be the way in which it introduces depth and challenge gradually so that anyone from a hardcore gamer to a non-gaming average Joe can play through it and enjoy it. PvZ2 continues this tradition, but it also includes the option to skip the first few starting levels if you’ve already played the first game. These are the levels where the most basic game mechanics are introduced (plant the smileys to get sun, plant the shooties to shoot the baddies, etc.), so it would all be a retread for any fan of the series. After that is when the new features start to show.

I was afraid PvZ2 would just add some more redundant plants and zombie types and call it a day, but surprisingly, it carries on the tradition set by its predecessor — interestingly themed stages with creative gameplay gimmicks in each one, and a new feature introduced every few levels. As the punny subtitle It’s About Time implies, the game is about traveling to different time periods — three, in fact, with a fourth one promised to be released whenever they get around to it. Each time period has its own twists.

You’ve got Ancient Egypt, and the biggest gameplay twist in Egypt is graves. Now, the first game had graves, but those only prevented you from planting in their spaces. This game takes a completely different spin on the idea by making the graves obstacles for your plants’ projectiles. Your peas will collide with a grave if it happens to be between the shooter and the zombie, and that can make placement tricky. The graves have their own HP, so if you keep shooting them they’ll eventually break, but you can also bypass them by throwing down catapult plants (you may also remember them from PvZ1, though they served a completely different purpose there).

Then you’ve got the Pirate Seas, and there the big twist is that you’re fighting on wooden planks connected to the ship. This means some rows are just straightforward as usual, but some end early and the zombies in those rows have to jump across the water with ropes. You have to prepare accordingly, as they’ll already be halfway toward the goal when they land. 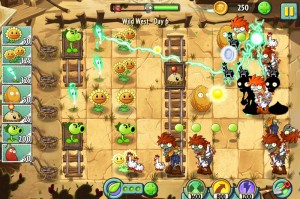 And then there’s the Wild West, which has the biggest twist of all: minecarts. Some of the spaces are occupied by rails, and each railway only has one minecart. You have to plant on the minecart, and drag the cart between each space. This completely changes the dynamic of the game, as you have to put down one strong plant in each cart and move them around as the baddies approach.

It’s all designed and executed very nicely, and I never found myself getting bored throughout it all. That could also be because it added some new core features! There are new these little powerup balls you pick up in each level called plant food, and you use plant food on one individual plant to make it do a cool thing. A peashooter will shoot a whole bunch of peas in front of it, the sunflower will give you a pile of sun, the wall-nut gets a shell of steel, and so on. It helps a lot in short-term micromanagement, and if you can hold onto them until the end of each level they can make the final waves into cakewalks. It’s a really nice change in pace.

There’s also a fast-forward button, which I remember wishing the first game had. See? The game is even willing to address its predecessor’s (very few) flaws!

And I think the game’s biggest triumph is the completely revamped Survival Mode. The survival mode in PvZ1 had you choose which plants to use from your entire list at the start of each round, and the challenge would keep ramping up and up until you’d die… unless you used cob cannons, which made it fairly trivial to go on forever. PvZ2 adds a new layer of challenge to the whole formula by starting you off with only the basic three starter plants (sunflower, peashooter and wall-nut), and then letting you choose one of three random plants to add to your roster between each round. This, combined with the somewhat random nature of the levels themselves, means that virtually every run of survival mode will play out differently. It kind of gives the gamemode a Roguelike-esque quality in that sense. 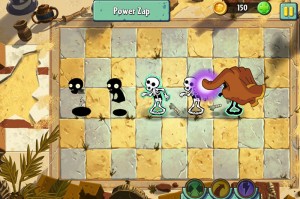 It is, however, let down a bit by another new feature, which is the super-creatively-named Powerups. Powerups are what you spend your coins on in this game. They’re one-time-use, they cost a whole bunch (800-1200 depending on which you use) and you basically use them to kill most of the zombies on the screen really quickly. Coins can take awhile to grind, so they’re basically just a quick fix you can occasionally use on a level if you just want to beat it and get to the next one. But they made a serious mistake in letting you use them for survival mode, because it means you can just cheese your way to a really high wave by saving up your coins and then blowing them on powerups. And if you run out of coins you can just save your survival game, go grind more coins, and then come back and get even farther! It completely invalidates the system if you choose to use it.

If you intend to compare your highest score in survival mode with your friends, I say it only counts if you didn’t use any powerups. Ever since I made the vow to never use powerups in survival mode I’ve been playing it all the time, every day, and the farthest I’ve gotten is level 26. (I mostly play in the Ancient Egypt survival mode, if you play the game yourself and wanna compare!)

Look, I know that vilifying EA is a cool thing to do in the gaming community. And for the most part, it is totally justified! Recent titles like the new SimCity and Dungeon Keeper are reprehensible. EA loves to take beloved titles and morph them into soulless, money-sucking husks of their former selves. But trust me when I say that Plants vs. Zombies 2 is a delightful exception. It is absolutely worthy of its name. It carries on the spirit of the original and brings some very nice improvements, both in gameplay and in aesthetics; in fact, its visual upgrade is so pretty that playing the old PvZ is now jarring to me because of how much uglier it looks. They’ve also demonstrated a willingness to supply regular free updates — just recently I got to face a new and unique boss event at no cost.

Bottom line: if you liked Plants vs. Zombies and you have a smartphone, give the sequel a shot. Even if you’re put off by microtransactions. If you don’t want to spend money, just don’t click on the shop button. It really is that simple.