So hey, I played a bunch more Risk of Rain, both with the Bandit and the Enforcer. The Bandit was kind of meh, in my experience: I understand how his movement and mobility kit should work, but it never really felt impactful to me. The Enforcer, on the other hand, is hilarious: his big forward shield can block any damage from the front, turning most protracted engagements into a glorious turtling match. 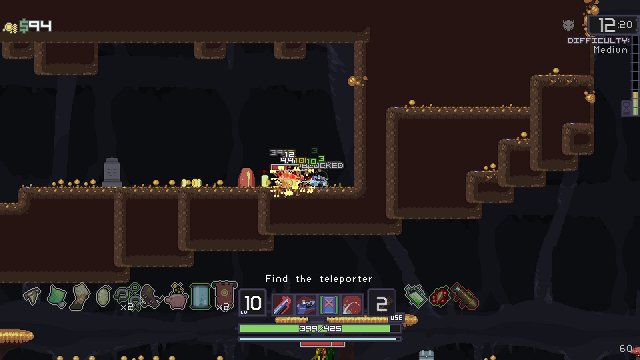 They can’t touch this, and it’s *great*.

Between the three of them — though clearly favouring the Enforcer — I’ve played significantly more of Risk of Rain. I haven’t ‘won’ yet, if that’s even possible. I did get to a teleporter in my fourth world that was called ‘Divine Teleporter’, once. It gave me the option of proceeding or ‘revisiting earlier levels’, and I think I might have accidentally selected the second option? That would explain why I found myself in a tileset I’d seen before, fighting familiar but way more powerful enemies before being killed by a Magma Worm made of lightning. 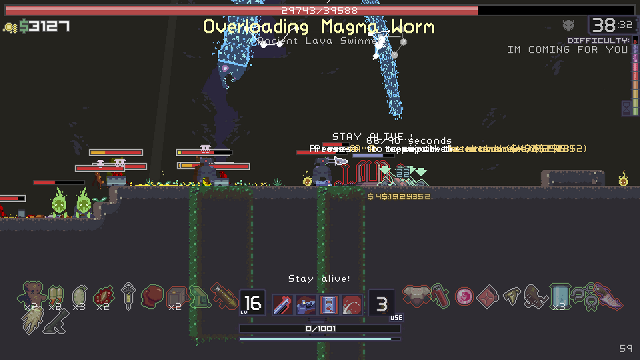 Because *just* being living magma was deemed too easy.

On the whole, I’m having quite a lot of fun with Risk of Rain. I daresay that it’s a pretty well-designed game! It’s fun to play, incredibly challenging without feeling too cheap, and directly viscerally satisfying. It’s mostly good for short bursts, because the basic gameplay does get a little old after a while… but the leaderboards form a good long-term draw for people who are into that sort of thing, and the unlock system will likely at least temporarily hook the people that aren’t.

If I had to describe Risk of Rain in a single sentence, it would be ‘horde-mode survival action platformer’. It’s a simple game to explain mechanically: run around, shoot monsters, collect items, and get to the teleporter as fast as you can. Four buttons for walking, four for actions, one for jumping, one for using items, and two for activating in-world things. And those simple mechanics strongly work in the intended experience’s favour. Risk of Rain is a great example of ‘easy to learn, hard to master’.

Risk of Rain’s playing experience is a combination of these simple basic mechanics, viewed through the lens of your selected class, and at least partially influenced by the random items and drones you collect. Class significantly influences gameplay choices: the Commando’s dodge roll emphasized mobility, the Enforcer’s shield rewards turtling, the Bandit’s stealth and cooldown resetting attack mean tactical timing are necessary. And so on, and so forth. Items are less impactful overall, but particularly your healing items can be a strong influencer.

And that combination of class, items and mechanics is pitted against the interesting dichotomy of ‘need for exploration and more items’ versus ‘getting to the teleporter as soon as possible’ that Risk of Rain offers. Interesting tradeoffs abound. Will you go for the teleporter as soon as possible, even if that leaves you relatively underleveled and underequipped for the ensuing boss? Will you use your victory money to explore and try to get more items, even though the incrementing timer ever increments the difficulty? Or maybe you’ll stay in this good spot and farm monsters for a little while, just to be certain? But wait, oh shit, the difficulty just increased! 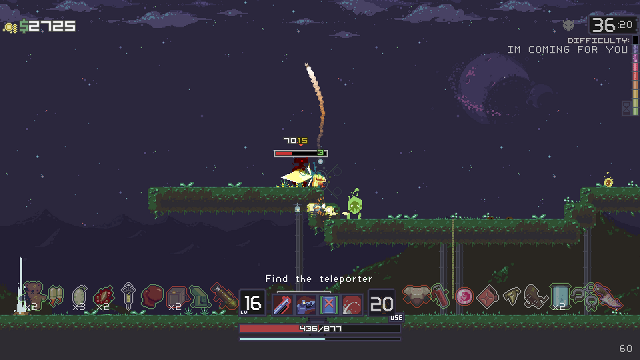 IT IS COMING FOR ME

When I say Risk of Rain is ‘directly viscerally satisfying’, what I mean is that it has rapid, direct action-consequence gameplay. Controls are usually tight and responsive, which is a major thing for a game this based on player skill. And feedback is obvious and immediate, meaning that it’s almost always clear what is happening on-screen, what is damaging you and how, what monsters do and what their colour-coded effects are, and so on, and so for. 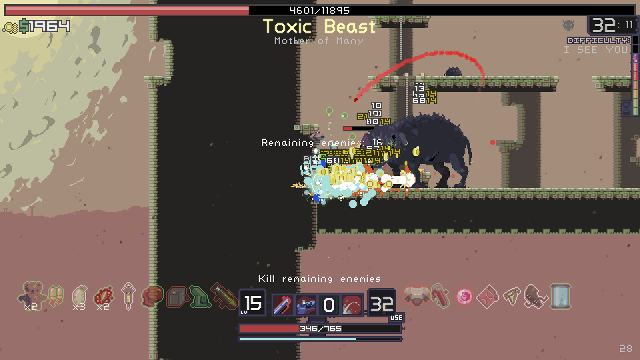 There is an initial, somewhat-steep learning with respect to items, monsters, abilities, level layouts, and even some of the rules (it took me a while to pick up on falling damage). But most of that information can be observed and learned through repeated play. And item effects are actually detailed really well in the post-game item log, complete with percentage effects and lore descriptions. 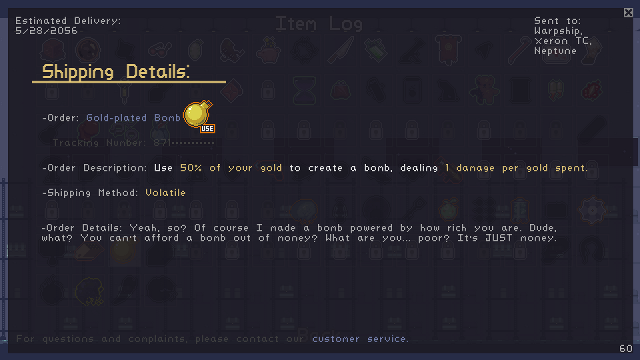 I’ll tell you what games Risk of Rain makes me think of: Spelunky, the Binding of Isaac, and FTL. All of them can be considered largely skill-and-luck-based games with roguelike elements, but with a different mechanical and thematic focus. Risk of Rain presents the same kind of enjoyment: a sense of player skill increasing and mattering over repeated playthroughs, playing the — occasionally rough, occasionally amazing — hand the random generator deals you, and a pervasive atmosphere of the game trying its damn hardest to kill you stone dead.

The fact that Risk of Rain manages to do this while also avoiding the ‘you should probably check a wiki before even playing’ lack-of-information design issue that plagues so many of these games is just icing on the cake. Plus, both the item and monster log unlocks are pretty cool rewards on their own: both have interesting and well-written lore bits, and the monster log also showcases some frankly incredibly low-res artwork. 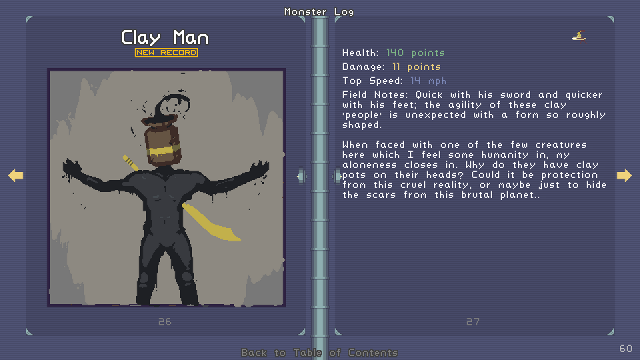 Incredible, and only occasionally creepy as hell.

In fact, the whole game looks and sounds really cool. Risk of Rain has a great aural palette, with different musical styles matching the different environmental layouts really well. And the low-resolution pixel art gives the game a definite sense of personal identity, while also just being pretty on its own. 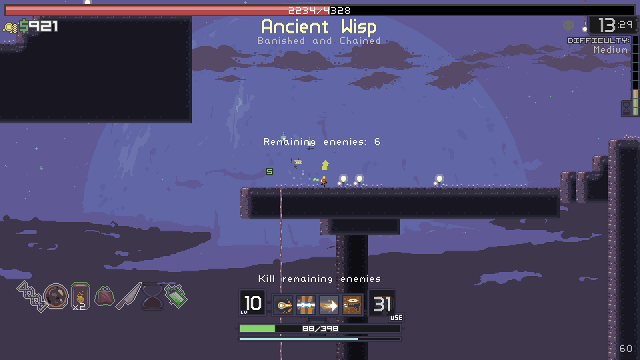 That’s not to say Risk of Rain is flawless, obviously. For one, the random nature of everything involved in every run can get tiring, especially when a few bad runs stack up in quick succession. I actually like how the individual level structures appear to be (mostly) set, because it allows for actual layout learning and player progression… but starting in the same corner of the same Desolate Forest three times in a row does reduce the magic of it a tad. This is more of an issue with Risk of Rain’s larger genre than with the game itself, though: I run into similar issues with Spelunky, the Binding of Isaac and FTL. It’s definitely an issue that’s present here too, though.

And while there is a lot of info available on how to unlock different items, and monster unlocks are quickly identified as being totally random, the process behind class unlocking is incredibly opaque. I honestly have no idea how to go about unlocking any of the remaining classes! I unlocked a Huntress, somehow. 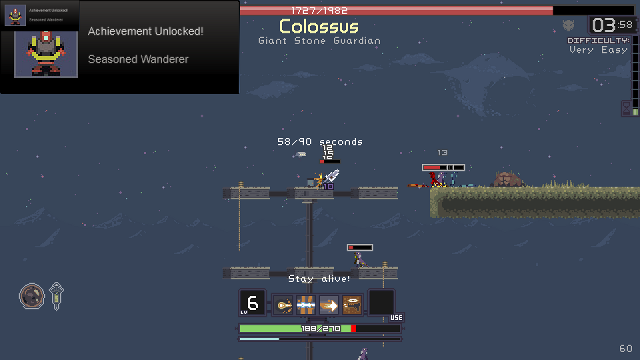 I’m not being facetious! I *honestly* don’t know how I got this class!

And I’m reasonably certain this guy leads to something: 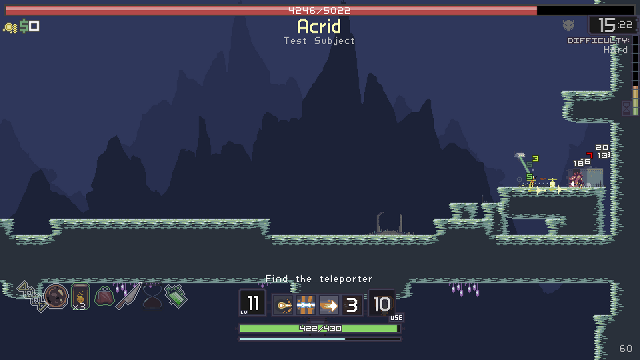 Call it a hunch.

But as for the other five, I wouldn’t even know where to start. And this lack of information can be a major deterrent to repeat play for people like me, who thrive on getting new toys to play with. Doubly so because certain item unlocks are tied to certain classes, which means there are a lot of items on the board right now I might never be able to get to.

Finally, Risk of Rain doesn’t really have a lot of long-term progression, or any kind of narrative or story. It is really a skill- and score-chaser through and through. This isn’t so much a ‘bad thing’ as it is a ‘statement of fact’, though: it’s a game that knows what it intends to be, and that caters to one particular experience very effectively. I can already notice myself starting to lose focus and interest — which is also partially due to the weekly nature of this column mandating that I move on soon. But there’s no denying I’ve had a good time playing Risk of Rain while I did, and I’m not tapped out just yet.

Turns out Risk of Rain is winnable! I beat it with the Huntress, the class I unlocked on accident. Her kit is based on mobility and shooting things with arrows, which I guess I took to really well! 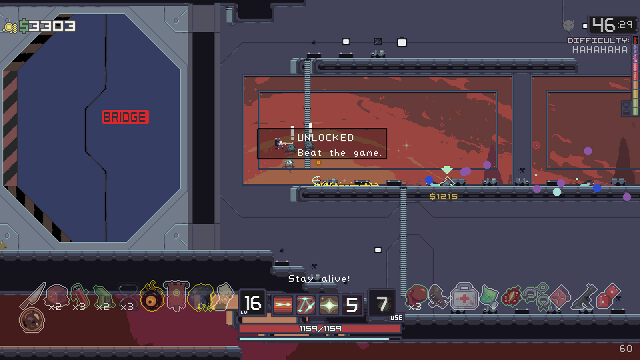 And beating the game gave me no less than three additional classes! 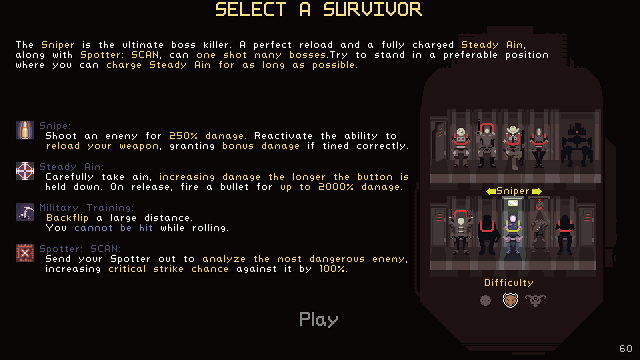 I can’t *wait* to one-shot some bosses!

Overall, I consider Risk of Rain to be a pretty good game. It’s an excellent example of this genre — subgenre? — which will particularly appeal to people who like this sort of thing: the relentless difficulty, the seemingly endless unlocks, the ever-increasing skill and score. But even for people who aren’t inveterate leaderboard-chasers, Risk of Rain is still a fun, engaging, fast-paced, demanding, relatively fair action platformer.

I must confess I can’t judge Risk of Rain’s long-term longevity. Like I said, the appeal of the single-player experience is already starting to wear thin a bit for me. Maybe the multiplayer experience will make Risk of Rain last longer? I’m definitely planning on trying that out sometime soon, as soon as I get one of those five people to hang out.

But again: even now, Risk of Rain presents a focused experience and a fairly good time. The ten-dollar Steam price tag seems pretty fair, too. And it even has a demo to boot! I highly recommend you look into that, if nothing else. If you don’t like it, you don’t like it… but who knows? You might find yourself surprised by inclement weather.